“My Starfish Story” by Mati Spencer… 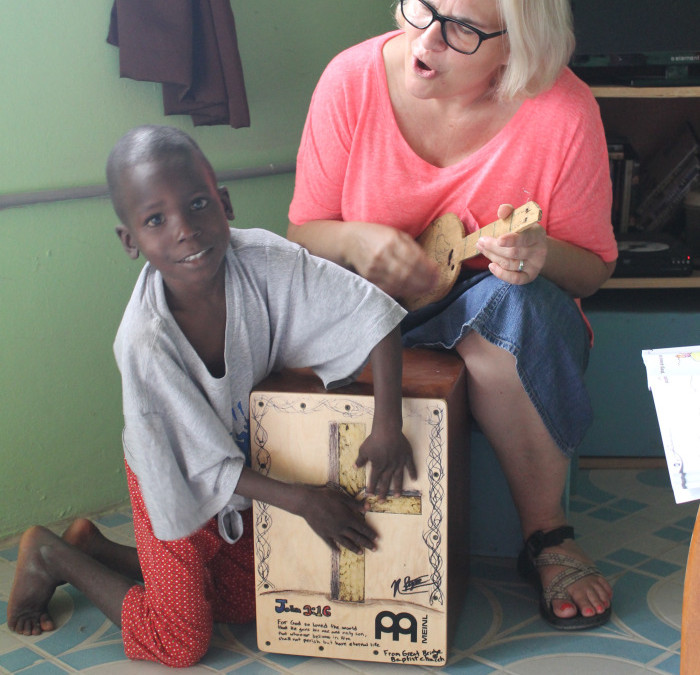 There is a story I’ve heard that tells of a young boy walking along an ocean beach, throwing starfish that were washed up on the shore back in to the water. A man walked up to the boy and said, “Why are you throwing these back in to the ocean? There are thousands out here. It can’t make a difference!” To which the boy replied, while picking up one starfish, “It matters to this one.”

Today I was able to have an experience like this, as I walked back from the church service. I noticed a group of boys who hadn’t attended church, and were wearing the typical tattered clothes. One very small child, who I’d played with before, Djieufert (pronounced JAH-fet), grabbed my hand and began following me around. I noticed the flies and gnats surrounding his body, and even crawling on his face. It was obvious from his skinny arms and legs, and distended belly, that he hadn’t eaten in a while, or did not have regular meals.

He looked at me with sad, hollow eyes, as a gnat crawled around his eye and dirt and scratches covered his bare feet. A white fungus covered the back of his head, and he kept scratching his scalp with dirty fingernails.

My heart ached for him. He looked to be about the age of four, and the fact that he was so young, yet so hollow and sorrowful, broke my heart.

I took him inside the Hope Center and asked if I could clean him up a bit and give him some lunch. Andrew and Laura agreed, of course, and I began fixing him some leftovers from our dinner the day before. He sat at the table and ate three small bowls of rice, a bowl of hot cereal, several cookies, and some M&Ms left by a previous team. While he ate the food, I began searching for some clean clothes for him, because the ones he had on were ripped and dirt-caked.

Finally rounding up some toddler girl’s leggings and a big t-shirt, which was all I could find to clothe the small boy, I returned to the mission house where he was still downing as much food as he could fit in his mouth.

Once Djieufert finally finished his meal, I stripped him down and gave him a bath. The water was black with the dirt from his body. His tiny knees were knobby with malnourishment, and his belly was swollen from lack of food. His shoulder blades stuck out far from his back, and he looked cautious as I washed the grime from his body. Laura gave me some medicine for the fungus on his head, and within minutes after rinsing off, much if it was gone. When he got dressed, the toddler leggings were hanging off of his four-year-old body. The shirt swallowed him, but at least it was clean and intact.

After the hot meal and bath, Djieufert cuddled up to me to watch a movie. He soon asked for more food, and within minutes, it was like a new child was in the missionary house living room. The hollow, hungry, and lost look was replaced with childish giggles and a playful grin. He began scampering around the house, getting in to stuff and playing with the Rader’s small puppy. Djieufert no longer had the world laying heavy on his shoulder, but felt loved, clean, and full. He even began to sing about “Jezi” (Jesus), and beat happily on a Djembe, tapping his tiny foot along with his beat. The transformation was so dramatic to watch. It was such a privilege to be able to see this child blossom in a clean and safe environment. In that moment he looked like every four year old should: joyful.

Through a translator, we gathered that he hadn’t eaten in a couple days. Though he attends school during the week, and is fed there, he isn’t able to eat on the weekends due to his family’s lack of food. In addition, his family has many children, and the Haitian culture tends not to be especially loving to children, so personal affection is very limited and rare. Simply spending one afternoon with him, eating a good meal, getting cleaned up, and just being silly, Djieufert looked like a new child.

When I look out at Thoman and see the desperate need, I get overwhelmed, thinking there is no way to cure it all. But maybe, just during one afternoon, I can change one child’s life for a little while. And hopefully I’ll be able to do it again soon. After all, it may look like one meal and bath doesn’t matter as compared to the great need here, but I’ll tell you one thing: it mattered to Djieufert. 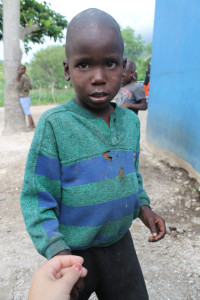 Mati Spencer is currently serving as an intern at the Hope Center in Thoman. Click HERE to follow her blog.